Mathieu van der Poel warned that he’d be racing the UAE Tour in support of his Alpecin-Fenix teammates but he found himself at ease in the echelons on Stage 1, – the ADNOC Stage – a day that was marked by an unexpected scenario.... 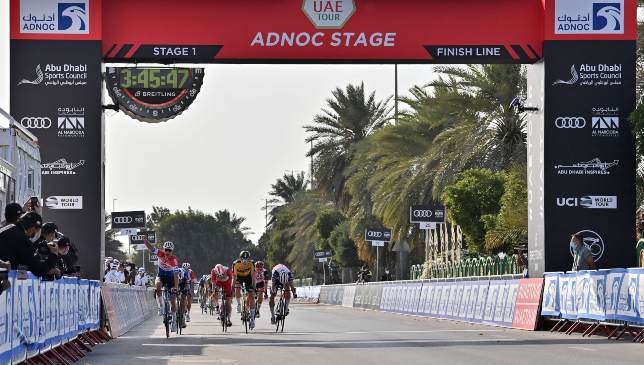 Mathieu van der Poel warned that he’d be racing the UAE Tour in support of his Alpecin-Fenix teammates but he found himself at ease in the echelons on Stage 1, – the ADNOC Stage – a day that was marked by an unexpected scenario. Among the pre-race GC favorites, Adam Yates, Tadej Pogačar and João Almeida made the decisive 23-man front group, the latter taking six seconds of time bonuses by winning the two intermediate sprints during the stage. Top sprinters Elia Viviani and Fernando Gaviria were also up at the front but Van der Poel was the strongest at the finish despite recently switching (with no respite) from the cyclo-cross world championship to WorldTour road racing, both events being held in a sandy environment with a beach-side finish however. STAGE RESULT 1 – Mathieu van der Poel (Alpecin-Fenix), 176km in 3h45’47”, average speed 46.770km/h 2 – David Dekker (Jumbo-Visma) s.t. 3 – Michael Mørkøv (Deceuninck – Quick-Step) s.t. JERSEYS The Red Jersey, sponsored by ADNOC (General individual classification by time) – Mathieu van der Poel (Alpecin-Fenix) The Green Jersey, sponsored by Etisalat (General individual classification by points) – Mathieu van der Poel (Alpecin-Fenix), to be worn by Michael Mørkøv (Deceuninck – Quick-Step) The White Jersey, sponsored by Nakheel (Best Young Rider born after 1 January 1996) – David Dekker (Jumbo-Visma) The Black Jersey, sponsored by Abu Dhabi Aviation (Intermediate Sprint Jersey Classification) – João Almeida (Deceuninck – Quick-Step) GENERAL CLASSIFICATION 1 – Mathieu van der Poel (Alpecin-Fenix) 2 – David Dekker (Jumbo-Visma) at 4″ 3 – Michael Mørkøv (Deceuninck – Quick-Step) at 6″ 4 – João Almeida (Deceuninck – Quick-Step) at 7″ 5 – Tadej Pogačar (UAE Team Emirates) at 8″ What they said: Stage winner and first Red Jersey wearer of the race Mathieu van der Poel said in the press conference: “It was really unexpected to be honest but it was windy from the beginning onwards. I was immediately in the first echelon and I felt good. But then, with the head wind, we regrouped with the peloton and the bunch split again after the intermediate sprint. I was able to catch the first group and it was very hard racing until the finish line. It was good to have teammates in the front group, especially Gianni [Vermeersch) who helped me a lot at the end because Roy was dropped a little bit before. Gianni did an amazing job again covering moves in the finale. “I still felt really good for the sprint. I knew I just had to start sprinting when I thought it was the right moment to go. The hard racing was good for me for the sprint. Normally there were a few guys faster than me but the heat made it a very hard race as well. That gave me confidence that I could go for the sprint, which wasn’t the plan before. I didn’t expect such a stage and such a result at all. I had a rest after the cyclo-cross world championship and I started training with the team one week before coming to the UAE. So I think it’s my cyclo-cross form that’s made me a winner today.”
Read More

Rohr Urges Agali And Agu To Scout For NPFL Players

Shaken Sharjah out to prove AGL title credentials in MW20

Even with 11 titles, Devance still motivated to win more

Tanzania: Zuchu Is the New Face On Diamond's Record Label...

Herve Renard left with plenty to ponder after Saudi Arabia...

A doubleheader against Jamaica witnessed contrasting fortunes, and displays, when...

[News24Wire] As the national lockdown continues as the country fights the spread...

It’s a cruise for Superal in Riviera tournament

Fully recharged coming off a three-week break, Tony Lascuña will shoot for a sweep...

Lewis Hamilton will be heard throughout history, both for...

Greatness has beckoned for Lewis Hamilton, his victory in Istanbul ensuring he is...