Following the overwhelming success of PaRus Fight Championship in 2019, M Premiere presents another fascinating MMA event this weekend. On Saturday November 7 at the Jumeirah Beach Hotel you will see some great match-ups – here we break down... 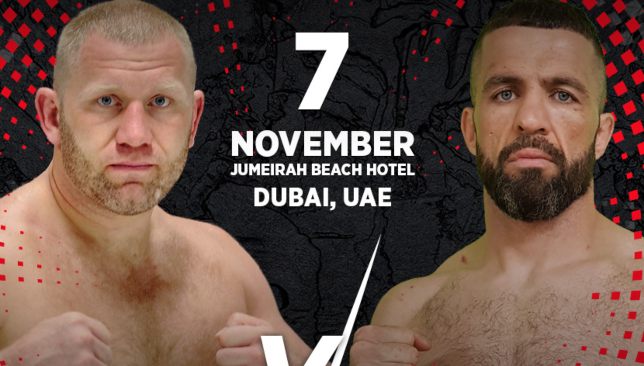 Following the overwhelming success of PaRus Fight Championship in 2019, M Premiere presents another fascinating MMA event this weekend. On Saturday November 7 at the Jumeirah Beach Hotel you will see some great match-ups – here we break down the full card. Title Fight 1 – Sergey Kharitonov v Oli Thompson – Heavyweight The night’s headliner will see a battle of two highly experienced and decorated fighters. Russia’s Kharitonov (29-7) has been plying his trade in Bellator and has recent wins over UFC alums Matt Mitrione and Roy Nelson. England’s Thompson (21-12) has also been seen in Bellator, and will be a familiar face to local fight fans having fought twice under the UAE Warriors banner in the last couple years. Title Fight 2 – Victor Henry v Denis Lavrentyev – Bantamweight This hotly anticipated rematch could be one to steal the show. American Henry (20-4) is on an impressive eight-fight win streak – which includes a decision win over Lavrentyev back in December 2015. That remains the only blot on the Russian’s 9-1 record, with his three subsequent fights all finishing inside the distance. Liliya Kazak v Edna Ajala – Flyweight Belarus’ Liliya Kazak (10-6-2) is on a three-fight win streak and has had her hand raised in four of her last five – with a couple of stoppages in there to boot. Fight fans sifting through her record will see a couple of very famous names on there in the form of current UFC strawweight champion Weili Zhang, and former champ Joanna Jedrzejczyk. Brazilian Ajala (9-7-1) scored a unanimous decision win last time out in September. Abdul Sami Fayzi v Leonardo Damiani – Welterweight Afghanistan’s Fayzi boasts a solid 5-1 record, and has won each of his last three fights inside the distance. Damiani, known as the ‘Puppy’ comes into the fight unbeaten in his last three and with a 7-2-1 overall record – with six of his seven wins coming by way of stoppage. Alexander Kovalev v Amr Abdel Malek – Lightweight The promising Kovalev (7-0) will be putting his unbeaten record on the line this weekend. The young Belarusian has been extremely impressive in the early stages of his career having only been out of the first round on two occasions. Egypt’s Abdel Malek may have lost on his last time out, but had been on a three-fight win streak before then. He carries an 8-8 record as a professional. Alexsander Vezhevatov v Nikolay Kovalenko – Light Heavyweight The 32-year-old Vezhevatov only has one fight on his record, a unanimous decision win a year ago. Kovalenko is of similar experience, with a 2-0 record – with both wins coming via first round TKO. Mahmoud Salama v Piotr Romankevich – Light Heavyweight Egypt’s ‘Iron Man’ Mahmoud Salama has been fighting as a professional for nine years, and has a 10-7 record. Amazingly in those 17 outings, he has never gone the distance. His current three-fight win streak has been built on first round stoppages. Romankevich is 1-0 as a pro MMA fighters, and is also undefeated as a boxer, and kickboxer. Abdel Ibrahim v Wade Saed – Middleweight Lebanon’s Ibrahim will make his pro debut this weekend against the UAE’s Saed who is yet to win in three professional bouts. Mohamed Ali v Sergey Sengeim – Heavyweight Egypt’s Ali has more than a decade’s experience under his belt in a, 11-14-0-1NC record that has seen him win just once in his last eight outings. Sanglem only has two fights on his 1-1 record with both of them coming in 2016. EVENT DETAILS Event Date: 7 November 2020 Doors Open: 18:30 | Show Starts: 19:45 Venue: Events Arena, Jumeirah Beach Hotel Tickets: from AED 195 (including VAT) For more information and VIP tables reservations: +971507686418; +971508702674 Website: www.mma.parusfest.com | www.mpremiere.com
Read More

IPL 2020 Team of the Week: Jasprit Bumrah hitting his stride at the right time for...

Urban-Ultra Mount Sana and other UAE fitness events to...

Mystery man Enriquez embraces chance to prove worth at...

Northeast Region Risks Losing a Generation of Boys and...

[African Arguments] Children risk death to escape Boko Haram. Yet, for many, their...

MANILA, Philippines—The PBA has opened the application for the upcoming 2021 Rookie...

You can’t write Tiger Woods off but it’s hard to see him...

Tiger Woods is over a week away from competing in his 23rd Masters, his first time...

[Vanguard] Music superstar, Davido, has released the video to his hit 'Dolce & Gabanna'...

Video: Trump attacked as 'superspreader of division and...

US president Donald Trump has been attacked by the Lincoln Project ahead of his...

[Premium Times] Nigeria deserves to be granted debt pardon from the International...

Pedro Emanuel must ease pressure building at Al Ain in...

Pedro Emanuel is confident he can save Al Ain from their tailspin when the stumbling...

‘Impossible is nothing’ for Saudi Arabia inspiration Farah...

Farah Jefry, adidas ambassador and the first Saudi sportswoman to represent the...