As England raced in at half-time leading 12-0 against Ireland, the scoreboard was slightly misleading given the host’s vast dominance in the opening 40 minutes at Twickenham. It could have easily been a 20-point advantage, such was the... 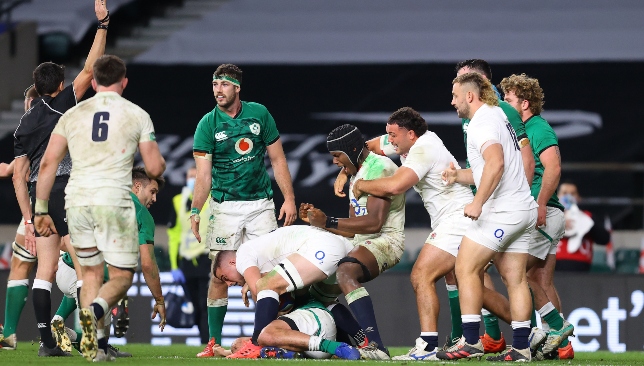 As England raced in at half-time leading 12-0 against Ireland, the scoreboard was slightly misleading given the host’s vast dominance in the opening 40 minutes at Twickenham. It could have easily been a 20-point advantage, such was the Red Rose’s unrelenting line speed, tackle execution and competitiveness at the breakdown. They purred with confidence. Eddie Jones’ men were sharper than they have been at any stage since last year’s World Cup final defeat to South Africa, their tenacious defence proving too much for an Irish side devoid of magic. Making 246 tackles in 80 minutes – with just nine missed – shows how comfortable England are with whatever is thrown at them, a testament to the tireless work done by John Mitchell. Of those eye-catching numbers, the backrow completed 33 per cent (74) of the total tackle count – one more than Ireland’s entire tally (73) for the game. The defence seems to be the real deal and players look to be taking responsibility for driving their own lofty standards, rather than Jones or Mitchell having to constantly encourage their men. It was a disciplined and powerful performance, showing how you need to be at the top of your game to challenge Jones’ men at present. They put pressure on Ireland all day, taking advantage of their inaccuracies at the line-out as well as general imprecisions around the paddock. Maro Itoje rose like a salmon catching the ball all day, claiming six line-out balls and making a further steal. Always a figure of authority, he made an immense 20 tackles and had the better of James Ryan throughout. Behind the scrum, Henry Slade’s defensive efforts deserve a special mention, but it was Johnny May who shone brightest, scoring his 30th and 31st international tries. His second try, in particular, was sublime, out-sprinting the Ireland defence to touch down just before half-time. When 18-0 up late in the game, England had the chance to put the foot down and widen the gap between the teams. They kept the pressure on their opponents but blew one or two easy scoring opportunities. Remaining stationary, they allowed the visitors to touch down for a late consolation score through Jacob Stockdale. However, even with an 18-7 victory, the scoreline is deceiving, given their overall dominance. Nevertheless, it is another step up again from the previous week’s triumph. Against Georgia, they didn’t shift out of second gear, securing a comfortable 40-0 win. Dominating up front, they safely negotiated their way through the phases to score six tries. And after a difficult few months, Jones can only be relieved to have his team zipping around the paddock and stringing consistent displays together once again. The win over Ireland means it is England’s sixth successive victory since losing 24-17 to France in February. Even if the Autumn Nations Cup does not earn world ranking points, it is still a promising exercise for Jones and his coaching team to test new players and gather that bit of match sharpness again. New Zealand, England and France are the top three teams in the world at the moment, each playing an attractive brand of rugby to capture the imagination of fans in a challenging year. England, ranked above the All Blacks in second, are playing more complete rugby than the Southern Hemisphere side. But until they overcome teams more consistently, it is hard to know exactly where they stand in comparison to the three-time World Cup winners. Next up for England is a winnable game against Wales, a team that have lost six of their last seven matches. Barring an upset in Llanelli, it is almost certain they will return to Twickenham in two weeks to play France in the Autumn Nations Cup final.
Read More

Play on or go home

No. 4 pick Mikey Williams eager to put on show for TNT

San-En NeoPhoenix lose in OT as Thirdy sidelined with injury

Baylor never trails in win over Arkansas, charges to Final...

Team Lakay’s goal: Get all title belts back

Ebonyi sets up taskforce to stop arbitrary increase of...

The tragedy underneath the surface of Philippine sports was revealed over two decades...

Pope: Coronavirus could be a 'response' from nature to...

When your friend is a Michael Jackson

Terrafirma is still looking for its first win after five games inside the Philippine...

MADRID, Spain  – Twenty years after leaving Barcelona for the riches of the...

At 15 and still finding her way in professional tennis, Alex Eala has learned to...

Africa: Is the Coronavirus Killing Press Freedom on the...

[DW] As Africa remains on COVID-19 lockdown, journalists across the continent report...