The 13 th Mubadala World TenniscChampionship will host its most intriguing female match-up ever on day one of its return this December, after the Championship organisers Flash Entertainment announced Olympiccchampion Belinda Bencic as the opponent... 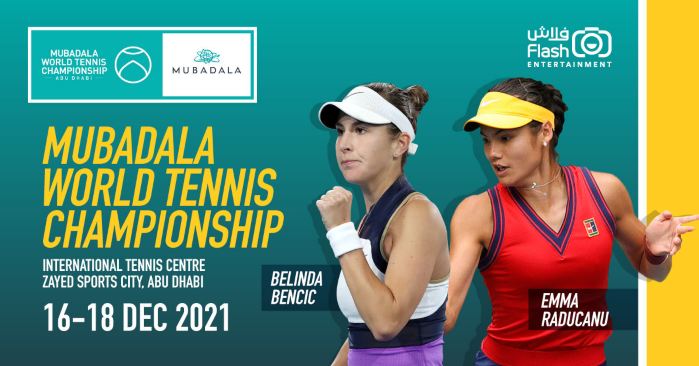 The 13 th Mubadala World TenniscChampionship will host its most intriguing female match-up ever on day one of its return this December, after the Championship organisers Flash Entertainment announced Olympiccchampion Belinda Bencic as the opponent for the US Open winner Emma Raducanu in thecwomen’s match. Former world No.4 Bencic produced some stunning tennis to win gold in the singles and silver in the doubles at the Tokyo Olympics this summer. Her match against Raducanu on centre court at the International Tennis Centre, at Zayed Sports City, in Abu Dhabi, will also be a rematch of their US Open quarter-final at Flushing Meadows, which Raducanu won before going on to win the first major of her career. “Since we introduced the women’s match in 2017, we have welcomed some of the biggest names in the game to compete in Abu Dhabi. With that legacy in place, the goal for the Mubadala World Tennis Championship is to keep evolving to ensure we bring our knowledgeable fans the best, unrivalled experiences. With Emma and Belinda confirmed, this year’s match is set to be the most intriguing women’s match in the Championship’ history. This is not one to miss,” said John Lickrish, CEO, Flash Entertainment. Bencic, 24, is looking forward to continuing her tennis journey, experiencing the game in a new country, and is eager to show her defeat against Raducanu at the US Open was a one-off. “When I was offered the opportunity to come and explore Abu Dhabi and all the Championship has to offer, I was very excited and happy to do it. It’s great to travel to new places. I’m looking forward to coming, to immerse myself in the many cultures there and interact with all the fans. Emma and I played a great match in New York and I am looking forward to another great battle, this time in Abu Dhabi,” said the Swiss star. Tickets, starting from AED 100 for adults and AED 50 for children, are available from ticketmaster.ae and Virgin Megastores across the UAE. In line with current health and safety protocols, social distancing measures will be in place within the stadium and throughout the Tennis Village. Premier Hospitality tickets are available, offering fans a premium F&B menu and courtside seating providing prime viewing and an unparalleled experience. More details are available on www.mubadalawtc.com
Read More

Lull before the storm: Gilas enters quarantine ahead of...

PH karatekas to pass up on events, focus on Olympic qualifying

With the national karatekas deprived of sparring for almost a year, Karate Pilipinas...

With the aim of performing well in the Paris 2024 Olympics, several senators have...

[New Zimbabwe] RETAILERS have called on the government to urgently avail foreign...

Attention will centre on wounded Riyadh giants for match-week nine in the 2020/21...

NEW YORK   – James Harden said Friday he is confident of fitting in alongside...

MANILA, Philippines — E-Gilas Pilipinas on Sunday regained its status as the king...

[AIM] Maputo -The Islamist terror groups operating in the northern province of Cabo...

[African Arguments] What to watch during lockdown.