Aslan Karatsev completed his fairytale run and beat  Lloyd Harris 6-3, 6-2 in the Dubai Duty Free Tennis Championships final, clinching a maiden ATP 500 title. With Saturday’s win, in a showpiece between players competing in their first-ever... 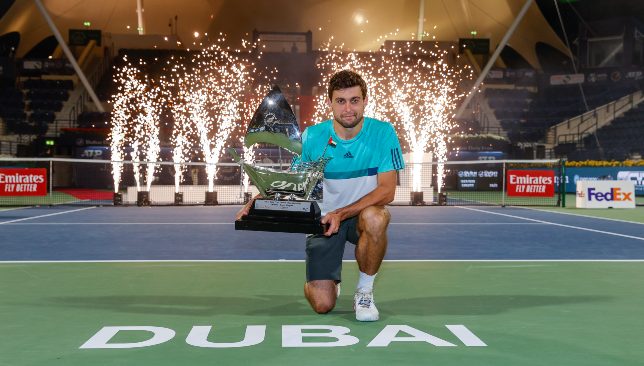 Aslan Karatsev completed his fairytale run and beat  Lloyd Harris 6-3, 6-2 in the Dubai Duty Free Tennis Championships final, clinching a maiden ATP 500 title. With Saturday’s win, in a showpiece between players competing in their first-ever ATP 500 finals, the Russian makes his Top-30 debut in the ATP rankings at 27. The 27-year-old also becomes the third Russian champion on the Tour this season, plus joins an exclusive club in becoming the third wild card to win this ATP 500 event after Wayne Ferreira (1995) and Thomas Muster (1997). Karatsev made the early break for 2-0, as a well-placed forehand made Harris go long on the return. Although Harris fought off three breakpoints to hold serve for 4-2, the Russian quickly closed the first set 6-3 in just under 40 minutes. Through the course of the match, he ripped groundstrokes into Harris’ forehand corners and opened the court well, striking 12 winners in the first set. A relentless Karatsev smashed 27 winners and saved the two breakpoints he faced, dominating behind his second serve return throughout the match (10/12) and clinched the trophy with an overhead winner. The Dubai Wild Card entrant began his 2021 season with a 3-10 record at tour level and has since compiled a 12-2 record. World No1 Novak Djokovic (Australian Open) and World No4 Dominic Thiem (Doha) are the only two players to have defeated him this year. Harris has plenty of positives to take with him, ahead of an expected appearance at the Miami Open. The South African overcame the likes of US Open Champion Thiem, Kei Nishikori and Denis Shapovalov on his path to the final. “It was a fantastic week, beating some top players and today’s game was a bit mentally and physically demanding”, Harris said in the on-court interview. Over a fortnight of scintillating tennis action by the ATP and WTA players, the Dubai Tennis Championship attracted 50 million viewers. In testing times, the tournament’s bubble arrangements received praise from several players. Canadian Tennis Shapovalov said: “Dubai is one of the best bubbles that we are going to have, and we even had a beach here; else it’s just hotel rooms and the tennis court and it can get really tough and depressing.”
Read More

Lotus Evija hypercar returns to the Middle East as car...

Idris Elba has revealed that he has tested positive for the Coronavirus on Twitter....

MELBOURNE—Organizers of the Australian Open on Tuesday ruled out reducing the men’s...

With WrestleMania 37 only a few days away, WWE Superstar Mark Andrews, who is also...

[Nation] Unlike yesteryears when multitudes of Catholic faithful would congregate...

[Namibian] The Ministry of Finance says it is aware of worries over the Emergency...

Johnson to challenge Moraes for ONE flyweight title

MANILA, Philippines—Demetrious Johnson will have his first title bout in ONE Championship...

When your friend is a Michael Jackson

No stranger to heavy lifting, Diaz deals with other weighty...

Right now, the weightier things that Hidilyn Diaz needs to take care of have nothing...

A round-up of how the cricket community is reacting to the COVID-19 (novel coronavirus)...