Al Jazira have extended the contracts of fan favourites Milos Kosanovic and Thulani Serero, with the duo signing new deals until 2023. Both players joined the Pride of Abu Dhabi in 2019 and have become key to Marcel Keizer’s starting 11 with... 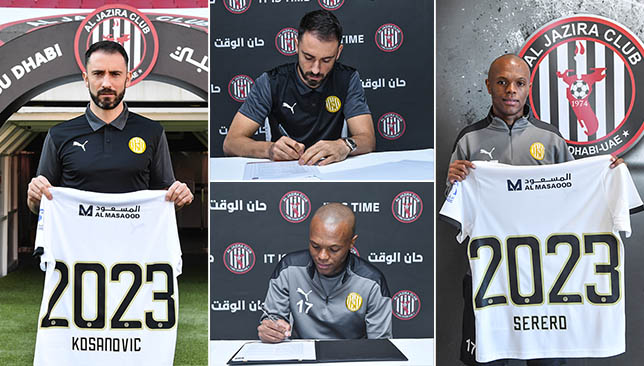 Al Jazira have extended the contracts of fan favourites Milos Kosanovic and Thulani Serero, with the duo signing new deals until 2023. Both players joined the Pride of Abu Dhabi in 2019 and have become key to Marcel Keizer’s starting 11 with the team currently second in the Arabian Gulf League. Serero, who has more than 40 international appearances for South Africa, joined the club having spent eight years playing in the Netherlands with Ajax and Vitesse Arnhem, while Kosanovic had spells playing top-flight football in Poland, Belgium and Turkey before making the move to Abu Dhabi two years ago. Commenting on the new deals, Chairperson and board member of Al Jazira’s sporting committee H.E. Mohammed Saif Al Suwaidi, commented: “Securing the contract extensions of key members of our squad is just as important as strengthening it with new ones. “We are all proud of Serero and Kosanovic’s performances, they are excellent professionals who give it their all every time they step out on to the pitch and it is great to have them with us for upcoming few years.” Sporting Director Mads Davidsen added: “Having two key players commit their long-term future to the club is brilliant news as we continue to build a strong squad. “We believe in our home-grown local players to be combined with international key players who add in experience and leadership to the group. And Milos and Thulani have shown their quality continuously. “We also believe in continuity and stability to build strong performances, so this is good day for everyone at Al Jazira.” Serero added: “Since joining the club in 2019 I have felt at home and thrilled to extend my contract with this great club. The fans have welcomed me since day one and I want to give back to them and I am targeting silverware during my time at the club. “I would like to thank everyone at the club from my team-mates to the fans to the board of directors for their support which really means a lot.”
Read More

Aaron has proven self, but isn’t stopping there

Nadal heads to Roland Garros with confidence and a clear...

An Indian Premier League campaign which started off so promisingly for Royal Challengers...

Barely 24 hours after a two week extension and a curfew imposed on Deltans to contain...

[World Bank] Washington, DC -The COVID-19 (coronavirus) outbreak has set off the...

As England raced in at half-time leading 12-0 against Ireland, the scoreboard was...

MANILA, Philippines — Carlos Yulo secured a couple of medals in his preparation...

And so it begins

TOKYO—Right here is where the gold drought ends. This is the kind of optimism harbored...

The country’s volleyball and beach volleyball teams will have a long preparation...

Football great Paulino Alcantara’s legacy only got the attention it truly deserves...