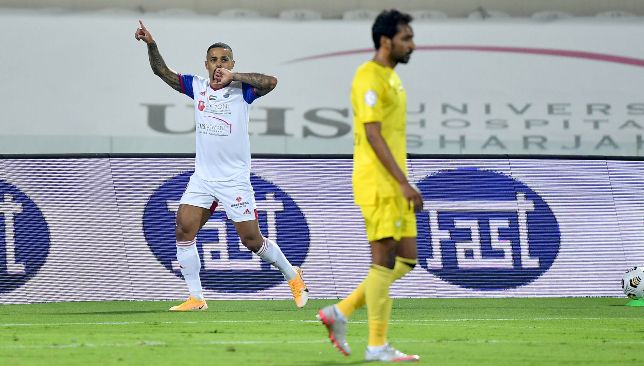 Stumbling giants Al Ain and Shabab Al Ahli Dubai Club risk being left behind in the 2020/21 Arabian Gulf League’s title race after an absorbing match-week nine. Goalless home draws with Ajman and Al Dhafra, respectively, opened up a sizeable gap to the leading trio with more than a third of the season played. Unbeaten leaders Sharjah maintained a three-point advantage on Thursday thanks to Brazilian striker Welliton’s heroics in a 2-1 win against his former club Al Wasl, UAE attackers Khalfan Mubarak and Ali Mabkhout combined on Friday for second-placed Al Jazira to prevail 2-0 in the capital derby while Al Wahda and centre-back Mohammed Ali Ayed’s back-post header settled an entertaining 3-2 triumph for third-placed Al Nasr versus lowly Fujairah. Elsewhere, sterling campaigns continued for fourth-placed Ittihad Kalba and fifth-placed Bani Yas. Swiss playmaker Davide Mariani was the star man for the former with an assist and goal in a feisty 2-1 downing of Khor Fakkan that ended with both sides down to 10 men, while Argentine midfielders Nicolas Gimenez and Gaston Suarez inspired the latter’s 3-0 humbling of bottom-placed Hatta. Here are Sport360°’s top picks and a talking point: PLAYER OF THE WEEK Welliton (Sharjah) (UAE Pro League). A familiar face wrought familiar pain on an ex-employer – plus, gained a familiar result for his current paymasters. Welliton only returned to Sharjah –  for whom 2018/19 title joy was the highlight of three outstanding years of prior service – in September once a serious knee injury waylaid unfortunate new signing Jonathas on the eve of the 2020 AFC Champions League group stage’s resumption. This, however, is a special union between player and club. Devious movement opened the scoring versus Wasl, a side on whom he notched nine times in 14 top-flight appearances during an abridged 2019/20, before a thumping 95th-minute header settled it for the King. That’s now 12 goals in his last 14 run-outs for Welliton, while four strikes past the 85-minute mark from indefatigable Sharjah have added six points to their pacesetting tally. GOAL OF THE WEEK Ali Mabkhout (Al Jazira) #علي_مبخوت يراوغ حارس #الوحدة بمهارة ويسجل الثاني..بعد تمريرة متقنة من #عبدالله_رمضان.. مهاجم #الجزيرة يعزز تقدم فريقه#الجزيرة_الوحدة #دوري_الخليج_العربي #أبوظبي_الرياضية 1 pic.twitter.com/yrP5C3fnNg— قناة أبوظبي الرياضية (@ADSportsTV) December 11, 2020 A goalscoring legend continues adding to his rich history. Another classic to add to the UAE record breaker’s 148-goal top-flight tally – only 18 behind Al Wasl icon Fahad Khamees – arrived in the beating of Wahda. Outstanding midfield prospect Abdullah Ramadan’s searing throughball cut a path through the visiting defence. Mabkhout trapped the ball at pace, stood up international colleague Mohammed Al Shamsi with a series of Ronaldo-esque step-overs and slotted into an open goal. Elite. COACH OF THE WEEK Jorge Da Silva (Ittihad Kalba) (Twitter/@ittihadkalbafc). Wonders continue to be worked on the UAE’s east coast by a Uruguayan veteran. An intense victory against 11th-placed Khor Fakkan was secured through Togo striker Peniel Mlapa’s fourth goal in eight AGL run-outs and Shabab Al Ahli-owned Mariani’s delicate swivel and finish. That’s now four wins from five fixtures. These outstanding results put this former yo-yo club on course to comfortably beat their previous best finish of 11th during the professional era. TALKING POINT AL AIN’S SEASON OF DISCONTENT Freshly installed sporting director David Platt is set for a frantic winter. The Englishman – not to be mistaken for his famous namesake – has been handed the daunting task of turning fortunes around at the UAE’s most-decorated club. In truth, it is hard to know where to begin after their worst start to a season in 13 years following the first five match-weeks. Thursday’s stalemate with Ajman saw Al Ain slip down to sixth, behind Kalba and Bani Yas. Only five sides have scored fewer than their 13 goals, though a disparity to their expected goals (18.26) of more than five showcases the side’s inefficiency. They also possess the third-worst defence in the top half with 10 let in. The division’s second-highest ball possession of 62.2 per cent has not been able to insulate them from these issues. Kazakhstan skipper Bauyrzhan Islamkhan is unavailable because of alleged problems with the AFC, according to Al Bayan, and unconvincing Angola forward Wilson Eduardo has struck twice in 12 run-outs. Successful surgery to the foreign quartet during the notoriously tricky mid-season market is, however, just a starting point. In competitions where the number of expats are capped, residual strength is found in the local contingent. Unfortunately for Al Ain, they appear within the midst of an alarming descent in this area. A changing of the guard from Omar Abdulrahman, Ismail Ahmed and Mohanad Salem’s generation to the current one has been beset with problems. Rayan Yaslam’s recurrent fitness issues have been truly unfortunate, yet the likes of uncapped Salem Abdullah and Saeed Jumaa do not seem equipped with the same skill sets. Raids in the notoriously tricky and complex domestic scene remain essential. This is without considering coach Pedro Emanuel’s long-term viability, plus how a winning mentality can be reinstalled after the rapid descents following 2017/18’s double. The Boss by (nick)name, not by nature. MATCH-WEEK NINE RESULTS Thursday Al Ain 0-0 Ajman Al Nasr 3-2 Fujairah Sharjah 2-1 Al Wasl Friday Shabab Al Ahli Dubai Club 0-0 Al Dhafra Hatta 0-3 Bani Yas Khor Fakkan 1-2 Ittihad Kalba Al Jazira 2-0 Al Wahda
Read More

Doctor, WNBL No. 1 pick Cainglet happy to be a role model

Suggs stepping up as No. 1 Gonzaga faces Northwestern State

Against KO-hunting foe, Ancajas vows to put on a performance...

Fire outbreak at the weekend destryed properties worth millions of naira in four...

Barangay Ginebra and TNT are where everyone expected them...

Scottie Thompson buried a game-winning triple and, before he could even catch his...

MANILA, Philippines — ARQ Builders Lapu-Lapu forced a do or die for a finals berth...

A clash of Arabian Gulf League titans is guaranteed when unbeaten 2020/21 leaders...

There are eight major overseas tournaments lined up next year, and the country’s...

Nigeria Badminton umpire, Naomi Adedoyin Oyinloye has been upgraded as a continental...

Professional golf makes its return on Tuesday with the men’s and ladies’ divisions...

Serena Williams says she will not play at Tokyo Olympics

Serena Williams said Sunday that she will not compete at the Tokyo Olympics next...

British Prime Minister Boris Johnson said on Monday he would do everything possible...