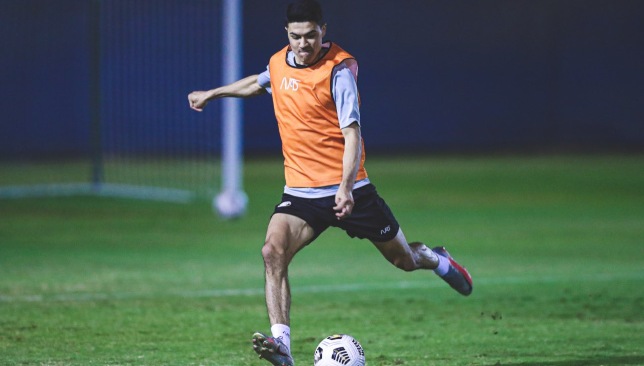 Uzbekistan winger Dostonbek Khamdamov could be thrust straight into a heated derby when new employers Al Nasr aim to extend Shabab Al Ahli Dubai Club’s disappointing season. Match-week 13’s standout fixture in the Arabian Gulf League pits third-placed visitors up against hosts who’ve descended from 2019/20’s pacesetters to a side who sit a dreary eighth – and are winless in five top-flight matches. The Blue Wave ranks have also been bolstered at the halfway stage by the exciting arrival of 19-cap international Khamdamov from Pakhtakor, replacing Curacao’s Brandley Kuwas in their four-player foreign quota. The ex-Anzhi Makhachkala wide man has been training this week in the UAE and will be expected to add further drive to the division’s third-highest scorers. “We have a big and important derby against Shabab Al Ahli, who we respect a lot,” said boss Krunoslav Jurcic. “They are one of the big teams and have a group of good players. “But we will enter the match with the goal of winning and collecting all three points.” Both sides are boosted on Friday by the presence of their UAE internationals. These players missed last week’s Arabian Gulf Cup quarter-final first legs amid preparations for Tuesday’s 0-0 friendly draw with Iraq. With the winter transfer market in full swing, Khor Fakkan may field Brazilian winger Paulinho versus second-placed Al Jazira on Saturday after his capture from Bulgaria’s Levski Sofia. Al Ain’s protracted loan pursuit of Japan winger Shoya Nakajima had yet to reach fruition ahead of the trip to bottom-placed Hatta. Leaders Sharjah will aim to end Ittihad Kalba’s eight-match unbeaten streak, Abu Dhabi bragging rights will be on the line when Al Wahda welcome fourth-placed Bani Yas and Syria’s Mohammad Kwid will begin his third spell in charge of Al Dhafra versus Al Wasl. Ajman know victory – which would be their first in 2020/21 – against third-bottom Fujairah will move them to within one point of safety. MATCH-WEEK 13 FIXTURES Friday 17:00 Sharjah v Ittihad Kalba 17:00 Hatta v Al Ain 20:00 Ajman v Fujairah 20:00 Shabab Al Ahli Dubai Club v Al Nasr Saturday 17:00 Khor Fakkan v Al Jazira 17:00 Al Dhafra v Al Wasl 20:00 Al Wahda v Bani Yas
Read More

Japan presses on with Olympics preps despite surging coronavirus cases

With a strong performance all tournament long, Pringle...

Ireland need to be accurate and assertive against dominant...

Fresh faces – one familiar and one new – herald restarts for two struggling...

Real Madrid forward Karim Benzema is to face trial for complicity in an attempt...

European Team of the Week: Cristiano Ronaldo and Lionel...

A set of contemplation and catharsis, maintaining its emotional grip for a long...

Angelo Kouame’s naturalization was passed on first reading in the House of Representatives...

Idris Elba has revealed that he has tested positive for the Coronavirus on Twitter....

TOKYO— The new president of the Tokyo 2020 Olympics organizing committee said on...

[DW] As the world focuses on the fight to curb COVID-19, Boko Haram has stepped...