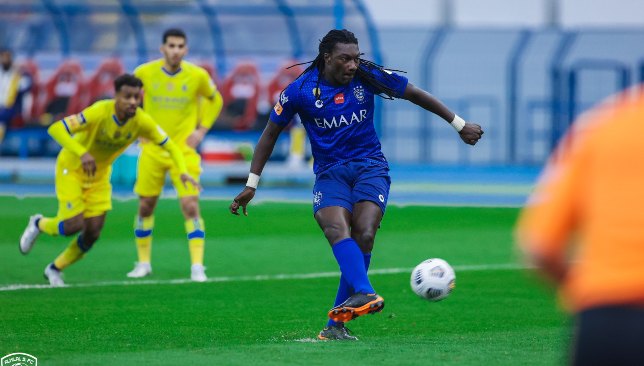 Match-week five in the 2020/21 Saudi Professional League contained a series of impressive individual performances. From irrepressible ex-France centre forward Bafetimbi Gomis making the difference in a tense 2-0 derby win for Al Hilal, to 20-year-old Al Fateh right-back Nawaf Boushal underlining abundant promise in the 4-0 rout of Ettifaq. Here, with the help of Wyscout and SofaScore, is our team of the week: GK: Habib Al Wotayan (Al Hilal) Debuts are rarely more satisfying than this. An all-Riyadh clash could not unsettle the 24-year-old, whose superb stops from Morocco winger Nordin Amrabat and Saudi Arabia right-back Sultan Al Ghanem helped condemn Hilal’s fallen neighbours to a fourth defeat from five SPL fixtures. RB: Nawaf Boushal (Al Fateh) A dynamic goal from a dynamic player. Boushal’s boundless energy witnessed him steal the ball near the halfway line, bamboozle several markers and find the bottom corner from inside the penalty box. Remember the name. CB: Iago Santos (Al Taawoun) The Brazilian won six out of seven aerial duels when Al Taawoun edged Al Wehda 1-0, for just a second SPL win in 13 fixtures. This percentage (86 per cent) is his best recorded in eight appearances since July’s move from Moreirense. CB: Ahmed Hegazy (Al Ittihad) On-loan West Bromwich Albion colossus exuded calm at the heart of the Ittihad defence and was blameless when Guilherme produced a fine leveller for Al Faisaly at the death. LB: Tawfiq Buhimed (Al Fateh) The reliable 33-year-old was the perfect foil for fellow Fateh full-back Boushal. Did his fair share of defensive work, plus produced one of the assists of the season for Ali Al Zaqan’s first. He stole the ball close to his own goal, charged onwards and then pinged a delightful ball to his grateful team-mate. CM: Saphir Taider (Al Ain) The former Inter Milan and Montreal Impact midfielder’s impact grows by the week. A first-ever three-point haul for promoted employers in the top flight was definitively secured with his 94th-minute spot-kick in the 2-0 triumph at fellow strugglers Damac. The Algeria all-rounder recorded 86-per-cent pass accuracy and made three interceptions. View this post on Instagram A post shared by Saphir Taider (@saphirtaider_officiel) CM: Arnaud Djoum (Al Raed) This was a display to savour from the Cameroon star. His incisive throughball was emphatically lashed in by Ahmed Al Zaein for the first, while Djoum’s winning back of possession sparked Mohamed Fouzair’s close-range clincher in the 2-1 triumph against Abha. CM: Marko Marin (Al Ahli Jeddah) The former Germany playmaker’s influence continues to develop at King Abdullah Sports City. Forcefully punished Lithuania goalkeeper Giedrius Arlauskis’ woeful clearance in the 50th minute to earn a 2-2 stalemate with fellow high-flyers Al Shabab. RW: Ali Al Zaqan (Al Fateh) The phrase “making your own luck” springs to mind. Al Zaqan moved onto three goals in five SPL matches with a brace which owed much to Ettifaq’s inadequacies. A fierce shot first squirmed through goalkeeper Mohammed Al Haiti’s grasp, before smashing home once an attempt to play out from defence by Estonia centre-back Karol Mets backfired. CF: Bafetimbi Gomis (Al Hilal) Gomis’ legend in the blue half of the capital continues to grow. Now sits on five goals and two assists in five run-outs versus Nassr, after his nerveless opener from the penalty spot on the hour mark and helping hand for substitute Saleh Al Shehri’s 98th-minute second. LW: Guilherme (Al Faisaly) The 25-year-old’s opening SPL goal of the season was a memorable one, curling into the far corner in the 92nd minute to earn a 1-1 draw. This maintained Faisaly’s unbeaten start to 2020/21.
Read More

Al Wasl and Fujairah both touched by death of Diego Maradona in poignant AGL MW7...

Sadio Mane accepts missing out on title would be “part...

For coach’s sake, CJ hopes to plant feet on Terrafirma

Hardworking Phoenix big man Chua in the mix for ‘Most Improved’...

[This Day] ... "The freedom we ask you to willingly forsake today will only last...

[VOA] In a video shared with VOA, a Congolese student in Guangzhou, China, peeks...

Football's year of shame: On and off the pitch

During a qualifying match for Euro 2020, a number of England's Black players were...

While it’s common for many of us to drink less than the recommended two litres of...

Very few teams get too high or too low with the result of Game 1 of a seven-game...

[This Day] The largest water park in West Africa, Park Vega, is set to launch in...

Hi, my name is Riley! I am full of energy but also enjoy long naps on my front porch....