A world united in grief and collective nostalgia when news broke of Diego Maradona’s death. Pain was sharpest in the 60-year-old’s spiritual homes of Buenos Aires and Naples as the loss of their most-celebrated adopted son sank in. Yet much... 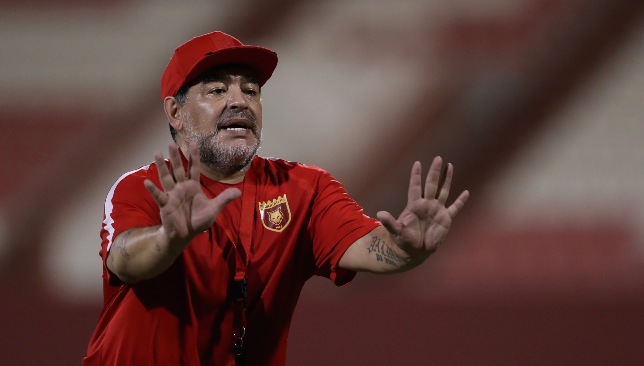 A world united in grief and collective nostalgia when news broke of Diego Maradona’s death. Pain was sharpest in the 60-year-old’s spiritual homes of Buenos Aires and Naples as the loss of their most-celebrated adopted son sank in. Yet much of the final decade of “El Pibe de Oro’s” (“The Golden Kid’s”) uproarious, complex and impassioned life was spent in the UAE. Maradona parted ways with Al Wasl after one trophyless season for 2011/12, culminating in an eighth-placed finish when the football deity’s all-too-human failings became glaringly apparent. He didn’t make the 2017/18 promotion play-offs when a five-year coaching absence was surprisingly ended by lower-league Fujairah, departing in the wake of their final-day draw which denied automatic progress. Poignantly, both clubs meet in the Arabian Gulf League on Thursday. A role as ‘Sporting Ambassador’ of Dubai Sports Council was bestowed on the venerated World Cup 1986 talisman and miracle-working, two-time Serie A champion with Napoli. This led to Maradona being summoned from his luxurious getaway on The Palm to greet the great and good attracted by the city’s bright lights. But such bare facts, as always, only scratch the surface of the Argentina icon’s vivid legacy. Stories apocryphal, embellished and factual are shared within the Emirates’ varied communities. They define a footballer who will be eternally cherished. This writer is fortunate to possess several. A frantic afternoon race to Sport360’s offices to sweep up as many copies as possible after grateful acceptance of an award for the – then – newspaper’s all-time World Cup legend was followed by a request to take a hundred back to Argentina to show the “ninos” (“kids”). In time for that evening’s flight. (Sport360). His common touch backstage on ‘The Victorious’ talent show, where a torrent of fellow megastars such as Ryan Giggs were greeted with the same grace as the lowliest studio runner. Playful jibes about the ‘Hand of God’ during a touchline interview with his English interviewer at Fujairah Stadium. A lasting handshake and warm “hermanos” (“brothers”) once our lengthy chat was concluded. Other sources regale about a member of staff tasked to translate Sport360’s pages every morning, lavish tips handed out to street cleaners, extraordinary generosity to Wasl staff, impromptu kickabouts at Dubai Police Officers Club, fevered crowds at restaurant openings in Abu Dhabi and weekly touchline support – just like all the other uncelebrated partners – for his girlfriend’s five-a-side team at Dubai Sports City. Ascertaining the veracity of such incidents didn’t feel important. Better to let the myth grow, unless something needed verifying for print. Maradona was one of those singular characters from which fact and fiction are equally entertaining. He was only meant to stop over in Dubai on his way to a ground opening in the Chechen capital of Grozny. Yet a crowd of 10,000 would be there to greet him days later at Zabeel Stadium, after an opportunistic offer of employment from a Wasl official was accepted. Weekly press conferences, performed in the impenetrable brogue imbued by his Villa Fiorito upbringing, became global media events. This, distinctly, never happens in Asian football. Then there was the union with one of few equally tempestuous footballers. An inexplicable 10th-minute head butt from goalkeeper Majed Nasser, already serving a 17-match domestic ban for slapping Al Ahli tactician Quique Sanchez Flores, sparked unlikely meltdown against Bahrain’s Al Muharraq in the GCC Championships League final. Twitter’s nascent power was felt when video spread of Maradona ‘kicking’ an intruding supporter’s hand for the unravelling of a banner of support from his grandson. وداعاً أيها الأسطورة
Read More

Sandgren allowed to board Australian Open flight despite...

League sets sights on April 9 opening for next season,...

[News24Wire] As the country proactively fights the spread of Covid-19, some universities...

[Premium Times] The Nigerians in Diaspora Commission on Thursday released a tribute...

Olympic silver medalist Hidilyn Diaz cannot afford a pause in training even in the...

RJ Jazul breaks out of shooting slump for career night

MANILA, Philippines—RJ Jazul had been either decent or struggling in the ongoing...

[Nation] Kenya international midfielder Willis Okeyo can only wait and see if he...

Zimbabwe: Govt Will Not Force Employers to Pay Wages During...

[New Zimbabwe] GOVERNMENT says it is not in a position to force private sector employers...

It is a car kitted out with technology its developers boldly predict will transform...

Barangay Ginebra found holes in the TNT defense inside the paint during the most...