Each week, Sport360 will bring you tips for the English Premier League’s official fantasy football game. Fancy pitting your wits against us? You can join “Sport360 Fans League” using the code: tc90vz Fantasy Premier League returns this weekend... 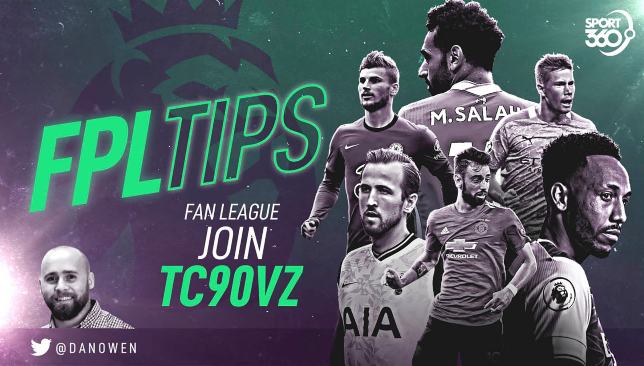 Each week, Sport360 will bring you tips for the English Premier League’s official fantasy football game. Fancy pitting your wits against us? You can join “Sport360 Fans League” using the code: tc90vz Fantasy Premier League returns this weekend after the international break, and a glut of injuries and tricky fixtures are making Gameweek 9 a difficult one to navigate. Those with a Wildcard still in play will be thankful for the opportunity to replace some missing high-profile players, but selection is still going to be a headache. With the likes of Trent Alexander-Arnold, Andrew Robertson, Ben Chilwell, and Matt Doherty all likely to be missing out this week, defensive big scorers are at a premium. Mo Salah is Covid-19 positive, and Raheem Sterling has a calf injury, putting question marks over some big midfield options. Throw into the mix tough-to-call fixtures such as Spurs hosting Manchester City, Leicester travelling to Liverpool, plus difficult away days for Arsenal and Chelsea, and you end up with something of a minefield. But, we are all in the same boat, so let’s take a look at some of the key options. Captain – Jack Grealish – Aston Villa – 7.5m Grealish may not be elite in terms of his price tag, but certainly is when it comes to point returns. The midfielder has already racked up 60 points this campaign thanks to four goals, six assists, and four clean sheets from eight games – including 21 points in his last two outings. So much of Villa’s play goes through Grealish on the left, and with him dominating set pieces, he is never far from the action. Surprise-package Villa entertain Brighton this weekend, but there is great value in picking up Grealish looking to the medium term also. West Ham, Newcastle, Wolves, Burnley, West Brom, and Palace fixtures take them up to Boxing Day – and some hefty hauls from the cult hero would be the perfect festive gift. Alternative: Bruno Fernandes – Manchester United – 10.6m While Manchester United flatter to deceive, one reliable element at Old Trafford this season has been Bruno Fernandes. The Portuguese has picked up scoring returns in 50 percent of matches and a home game this weekend against West Brom should have the Red Devils licking their lips. The top player in FPL when it comes to the creativity index, Fernandes has five goals and three assists from eight matches and you’d fancy him to add to that against a West Brom side without a win and averaging more than two goals conceded per game this term. Bold Choice: Ollie Watkins – Aston Villa – 6.1m Yes, we are sticking with Villa – but there is certainly value there against a Brighton side that has spluttered to say the least this campaign. Watkins has played every minute this season and has had three big scoring returns from four of his eight games. His 47 points put him sixth among forwards – and with only 7.3 percent of players owning him, there is a tidy differential option there too. One to get: Dominic Calvert-Lewin – Everton – 7.8m Dominic Calvert-Lewin scored his eighth goal of the season in Everton’s defeat at Newcastle. After bagging seven goals in his opening five games, DCL was an FPL hot-property and still has 57.2 percent ownership. With one goal in his last three, you could be forgiven for thinking the bubble has burst a little. However, those three games have coincided with Richarlison’s suspension, and with the Brazilian returning, Carlo Ancelotti will be able to employ his favoured 4-3-3 formation – the setup that saw chances aplenty created in the opening part of the season. Tie this in with fixtures against Fulham, Leeds, and Burnley in the next three weeks and the potential for some decent hauls is certainly there. One to avoid: Son Heung-Min – Spurs – 9.6m Son’s partnership with Harry Kane this season has been deadly That’s right, we are avoiding the second-highest point-scorer in the game. With 74 points from eight goals and a couple of assists this season, Son is the highest owned player in the game with close to 3-in-5 employing his services. Dig into the numbers, however, and that tally is propped up by four double-figure hauls including a monster 24 against Southampton. Half of his games have returned nothing in terms of goals or assists – including his last two. With a fixture list of Manchester City, Chelsea, Arsenal, Liverpool, and Leicester in their next half a dozen games now could be the time to go against the grain and find yourself a differential. Bargain Buy: Aaron Cresswell – West Ham – 5.1m Aaron Cresswell will be looking to add to his three assists already this season With the aforementioned defensive woes when it comes to big-ticket defenders at the moment, West Ham’s Aaron Cresswell offers a solid option at the back. He is 2m+ less than Trent Alexander-Arnold and Andrew Robertson, 0.9 cheaper the Ben Chilwell, and 0.7 less than Matt Doherty – yet it is only the Chelsea man who outscores him this campaign. Statistically the most creative defender in FPL, Cresswell has three assists and three clean sheets to his name plus a decent 38 points in total. Sheffield United this week should offer a chance to improve on that.
Read More

Herve Renard left with plenty to ponder after Saudi Arabia doubleheader against...

With timely hits down the stretch, Meralco now within a...

Castro shines in the stretch as TNT holds off Phoenix;...

Gernot Rohr - Dessers, Osimhen Have Taken The Place Of...

adidas unveils the ULTRABOOST 21, a fresh update to the...

MANILA, Philippines — One of the PBA’s elder statesmen, Reynel Hugnatan will continue...

Nigeria: UNAIDS Warns Against Misuse of Powers Against...

[Premium Times] Abia State Government has relaxed its lockdown for three days to...

My name is Isabella, but I go by "Izzy" for short. I like chewing on my older sister...

Rarely in a generation does an athlete emerge who not only redefines their sport,...

Vanessa Sarno had to readjust her sleep schedule to participate in an international...

US health officials made cautiously optimistic noises about the coronavirus despite...

Manchester United are capable of winning big trophies and need one final push to...