With the Saudi Professional League put on pause for the international break, now is an apt time to assess early impact of the summer’s transfer additions. The Kingdom’s finest had less than six weeks to shift focus from the previous campaign,... 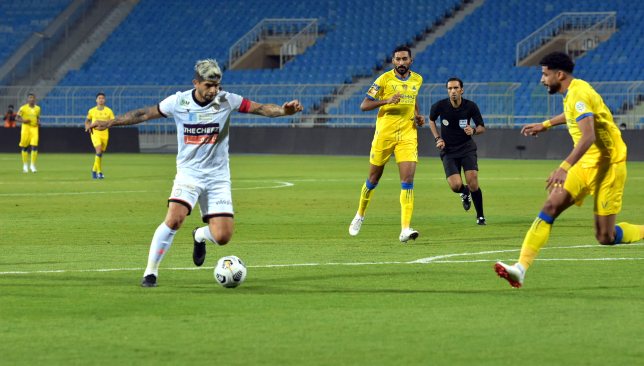 With the Saudi Professional League put on pause for the international break, now is an apt time to assess early impact of the summer’s transfer additions. The Kingdom’s finest had less than six weeks to shift focus from the previous campaign, because of coronavirus’ effect on the calendar. This placed extra pressures on recruitment. It is, of course, early days for 2020/21 and much could change in the coming months. But there have been notable successes and failures witnessed throughout the first four match-weeks. With the help of Wyscout and SofaScore, we’ve picked them out: HITS Ever Banega (Al Shabab) Ever Banega (c) celebrates his winner against Al Nassr (EPA). Reputation, alone, is not a guarantor when superstars make the switch from Europe to Asia. Argentina metronome Banega has, however, been an unqualified hit in Shabab colours. Last term’s distant seventh-placed finishers now find themselves second, locked on 10 points with leaders Al Hilal. The gap between them last season stretched to 29 points. A 97th-minute penalty earned dramatic victory against 2018/19 champions Al Nassr, while another came in last month’s 2-2 draw versus Al Raed. This is genuine leadership in action, carrying on where he left off with Sevilla in August’s triumphant Europa League showpiece. Banega’s 261 passes is only bettered by Hilal’s Gustavo Cuellar, with his ratio of 67.5 passes per 90 minutes the division’s joint-fourth best. The man’s a genius. Youssef El Jebli (Al Batin) Youssef El Jebli (r) celebrates in Al Batin’s win versus Abha (Twitter/@albatinclub). Eyebrows were raised when Al Faisaly chose to relinquish their Dutch playmaker, fresh from recording 10 assists in 2019/20’s debut campaign. Promoted Batin swiftly snapped up El Jebli and team-mate Khaleem Hyland. A solid return after a season away has since been enjoyed, in seventh. El Jebli’s combined tally for goals and assists of four is the division’s highest. The 27-year-old’s pair of assists helped inflict Raed’s only defeat, with a well-taken double then sending Batin towards a 3-0 thumping of Abha. Mourad Batna (Al Fateh) Mourad Batna (r) in action against Al Nassr (EPA). Fateh have made a flying start – and their Moroccan speedster has been key. Memories of a miserable final few years in the UAE were blown away, not least during his two-goal salvo past the 82nd-minute mark to down 10-man Al Ain. The 30-year-old right winger has unleashed solid numbers to date, when cutting back inside on his favoured left foot. His total of 12 attempts is the SPL’s joint-fifth most, 18 touches inside the penalty box is the third highest and his shot-accuracy percentage of 41.7 per cent ranks second. Batna’s tally of two SPL strikes in four run-outs would have been enough to make him joint-fourth top scorer in 2019/20. On current form, he may outstrip Dutch target man Mitchell te Vrede. MISSES Pedro Henrique (Al Wehda) Pedro Henrique (2nd l, top row) lines up for Al Wehda (EPA). New head coach Ivo Vieira has taken Wehda from fourth in 2019/20, to third bottom in 2020/21. These troubled early days for the Portuguese have been synonymous with disorder at the back. This is where the contribution of Henrique – a player present when Vieira guided Vitoria Guimaraes to seventh in Portugal’s Primeira Liga last term – can be queried. A lack of chemistry with resident Spanish centre-back Alberto Botia is apparent and the decision to send former partner Renato Chaves to Batin appears misguided. The ease of which Aqeel Al Sahbi outjumped him for Al Raed’s opener and how easily he was ‘sold’ by Abdulfattah Adam’s 94th-minute clincher in this epic 3-2 loss would have increased serious concerns which arose from the previous 2-1 loss versus Faisaly. Carolus Andriamatsinoro (Al Qadsiyah) Carolus Andriamatsinoro competing against Al Taawoun (EPA). Promoted Qadsiyah have struck only four times – the joint-second least – and blame for this paltry output will understandably gravitate towards their starting striker. Madagascar international Andriamatsinoro has contributed neither a goal or an assist across 399 minutes for new employers. This drought has come from nine attempts, which is the 11th most of any player in the division. But most alarmingly for an attacker who began 2019/20 in such lethal fashion for relegated Al Adalah, he’s only converted on three occasions in his past 25 top-flight matches. An alarming trend. Kim Jin-su (Al Nassr) Kim Jin-su (l) during Al Nassr’s defeat by Al Shabab (EPA). There is every reason to think Kim will come good for struggling Nassr. A startling left-back for South Korea, who has further excelled for Hoffenheim and Jeonbuk Hyundai Motors, has pedigree in spades. Yet the early months of his career in the Middle East has not been a time to remember. Kim was surprisingly overlooked for Nassr’s foreign quartet when the 2020 AFC Champions League restarted in September. He then started all three opening SPL defeats, before missing the remarkable 2-0 win versus Qadsiyah when multiple members of the squad were infected by COVID-19. Shabab right-back Fawaz Al-Sqoor, in particular, repeatedly exposed suspect defensive positioning in this month’s derby loss. In two of his three SPL run-outs he’s attempted only two crosses. An aerial-duels won percentage of 41.7 per cent is way down on his K League 1 average of 62 per cent, with a comparison for percentage of recoveries in the opposition half (SPL – 23.1 per cent, K League 36.3 per cent) being similarly unkind.
Read More

Urban-Ultra Mount Sana and other UAE fitness events to look forward to in November...

Yoga with a twist – Sound-off and blindfolded at DIFC Gate...

Patrick Reed in pole position for Race to Dubai title

Ginebra gains share of top spot with win over NorthPort

US cites 'credible allegations' of fraud in Tanzania election

The United States said on Thursday there were "serious doubts" about the credibility...

[New Zimbabwe] RETAILERS have called on the government to urgently avail foreign...

MANILA, Philippines — The Undertaker, one of the greatest WWE superstars of all...

Malawi: Chinese Man Deported for Refusing to be Quarantined

[Nyasa Times] Immigration Department in Mchinji has sent back to Zambia, a Chinese...

[Nation] Kenyans in China are asking the government to assist them return home after...