Every week we pick 22 of the best performing players in Europe’s top five leagues and, with your help, narrow it down to the best XI. Using polls on our Instagram stories, we pit players in each position against each other and let you... 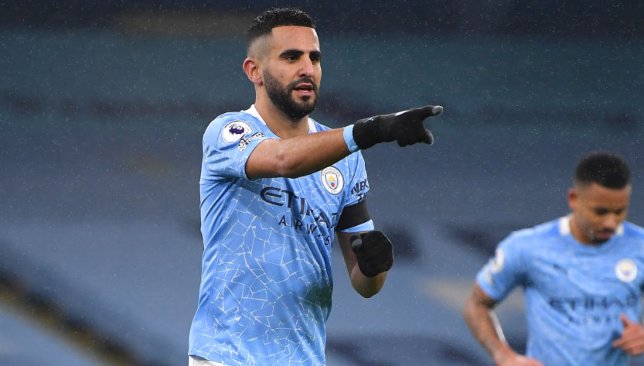 Every week we pick 22 of the best performing players in Europe’s top five leagues and, with your help, narrow it down to the best XI. Using polls on our Instagram stories, we pit players in each position against each other and let you decide who deserves to make the cut. A special hat-trick for Manchester City sees Riyad Mahrez stroll into our line up. Meanwhile, from the other half of Manchester, comeback hero Edinson Cavani features up front while Antoine Griezmann’s thunderbolt for Barcelona earns him a spot as well. Follow our Instagram page to get involved. Here’s what our latest European Team of the Week looks like: GK: Illan Meslier (Leeds United) One nervy moment when he surrendered possession to James Rodriguez but was excellent otherwise, making eight saves in what was a pulsating win over Everton. Meslier made a brilliant save early on and then continued to deny the Toffees to claim a clean sheet that helped secure 1-0 victory. RB: Ruben Aguilar (AS Monaco) Aguilar was excellent going forward, registering five key passes during a comfortable 3-0 win over Nimes. One of those passes was a perfectly stood up cross in for Gelson Martins to head home the second goal. He also made three interceptions on the day. CB: Alessio Romagnoli (AC Milan) Latched on to a flicked header from a corner and nodded it in at the back post. He marshaled his back-line well and never put a foot wrong as he led Milan to a 2-0 win, extending their superb start to the Serie A season. View this post on Instagram A post shared by Manchester United (@manchesterunited) CB: Kostas Manolas (Napoli) Napoli cruised to a 4-0 win over Roma but while most of the action was at one end of the pitch, Kostas Manolas ensured there was little to see at the other. The centre-back led the charge as his side stifled the opposition and he was the most composed player on the ball, leading the game in passes [78] whilst boasting an accuracy of 93.6 per cent. LB: Benjamin Mendy (Man City) The little defending Mendy needed to do against Burnley was coped with without incident and he went forward in support of the attack at will. Generated plenty of width down the left and capped a good performance with an eye-catching volley from Kevin De Bruyne’s pass. CM: Riyad Mahrez (Man City) Raheem Sterling spent the game on the bench as Mahrez demolished Burnley with a sumptuous hat-trick in a 5-0 win. His sublime touch, elusive play and emphatic finishing was a joy to watch. 2012 - Riyad Mahrez is the first player to score a hat-trick in a Premier League game whilst also creating 6+ chances since Santi Cazorla vs Reading in December 2012. Catalysts. #MCIBUR pic.twitter.com/HQrPhlxXlF— OptaJoe (@OptaJoe) November 28, 2020 CM: Max Kruse (Union Berlin) Gave his side a 2-1 lead in the first half by converting from the spot. With them down 3-2 in the second though and the clock winding down, Kruse lashed in a thumping strike from outside the area in the 82nd minute to salvage a draw. CM: Fabian Ruiz (Napoli) Dominated the midfield against Roma as he boasted excellent distribution with all six of his long passes finding their targets. He also pulled off four tackles in a complete display that was underlined by a well struck goal from the edge of the box. FW: Antoine Griezmann (Barcelona) He seemed to take out all the frustration of his spotty start to his career at Barcelona on the ball for his goal against Osasuna. His spectacular volley from distance was a shot in anger and something that belongs in FIFA 21. A more composed Griezmann then laid off a tidy assist in the 4-0 victory. FW: Edinson Cavani (Man United) The difference between United’s young attackers and the experienced Edinson Cavani was palpable when he was introduced at half-time with the Red Devils 2-0 down. His movement was that of an elite striker who understood the nuances of a centre forward’s role as he delivered the assist to spark the comeback before scoring twice in an inspired 3-2 win for Ole Gunnar Solskjaer. FW: Lorenzo Insigne (Napoli) A sumptuous free-kick goal and touching celebration from Insigne was the perfect tribute to recently deceased Napoli legend Diego Maradona. The diminutive Italian also bagged an assist during an emphatic victory. View this post on Instagram A post shared by Manchester United (@manchesterunited)
Read More

British sports events moved as ‘mark of respect’ for Prince...

Racing’s Scottish Grand National, as well as football and rugby fixtures in...

SUBIC—Billy Robles foiled a drive by Mike Ayonayon at the crunch as the Davao Occidental...

The DP World Tour Championship returns to Dubai on December 10-13. Here, we take...

The country’s top sports officials are pulling out all the stops to take advantage...

Tim Cone, the multititled Barangay Ginebra coach, said that the most important battle...

Background Since the coronavirus disease (COVID-19) was first reported in Wuhan,...

Report: Silver says NBA, union ‘running out of time’ for...

With the NBA in ongoing negotiations with the players union over proposed schedule...