Derby day in the capital will garner the greatest attention when the 2020/21 Saudi Professional League kicks back into gear. This month’s international break, plus the 2020 G20 Riyadh summit, paused the top-flight action in the Kingdom. But... 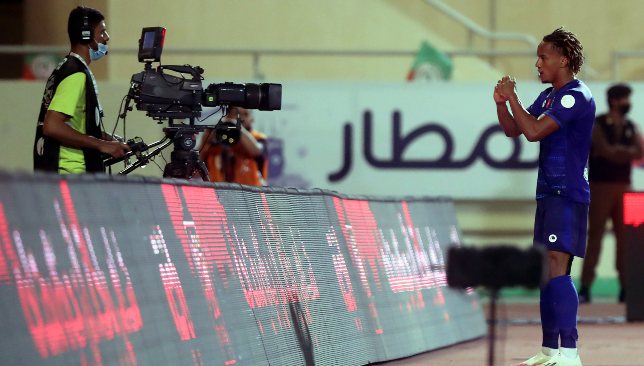 Derby day in the capital will garner the greatest attention when the 2020/21 Saudi Professional League kicks back into gear. This month’s international break, plus the 2020 G20 Riyadh summit, paused the top-flight action in the Kingdom. But it is set to come back with a roaring slate of match-week five fixtures, headlined by Monday night’s meeting between reigning champions Al Hilal and 2018/19’s finest Al Nassr. Here is a rundown, with Wyscout’s help, of this round’s trio of standout fixtures: AL HILAL V AL NASSR (MONDAY, 21:15) A fixture which has an all-together different flavour, in this curious campaign. Riyadh’s giants have been neck and neck since the start of 2018/19, sharing the last two titles plus a number of grandstand meetings. But as we speak, it appears these great rivals are moving in divergent directions. Monday’s hosts Hilal have serenely rebounded from September’s enforced 2020 AFC Champions League withdrawal as holders, calmly motoring to the top of the standings before the international break courtesy of a Bafetimbi Gomis-inspired 2-0 victory versus Ettifaq. Their backline has been breached just once and only three clubs have struck more often at the opposite end (six goals). Nassr, meanwhile, lost their opening three SPL fixtures and then astonishingly prevailed 2-0 against promoted Al Qadsiyah, despite a rampant coronavirus outbreak impacting more than a dozen members of their club. Depleted Al Nassr celebrate their win at Al Qadsiyah (EPA). With 2019 global top scorer Abderrazak Hamdallah yet to kick a ball in the SPL for a variety of reasons, they’ve stumbled towards being the joint-second-weakest attack on four goals scored. But, the Morocco striker is within a phalanx of recovered troops raring to go this week. If Nassr are to push up the standings, it is vital that the likes of $18 million Argentina winger Pity Martinez and Atlas Lion Nordin Amrabat begin clicking in a recalibrated attack at King Fahd International Stadium. Unsung hero Gustavo Cuellar, of Colombia, will mount the first line of defence for Hilal. Argentine winger Luciano Vietto might also receive his opening start since a €8 million summer switch from Sporting Lisbon, after Salem Al Dawsari’s exertions with Saudi Arabia. This particular test, however, is set to be faced without inspirational coach Razvan Lucescu. The Romanian is housebound after a COVID-19 positive, with trusted lieutenant Cristiano Bacci in control. Prediction: Al Hilal 3-1 Al Nassr AL AHLI JEDDAH V AL SHABAB (MONDAY, 19:15) If results run as expected later on Monday, this should be a contest to define who’ll mount the strongest challenge to unseat Hilal. Al Ahli claimed narrow 1-0 wins in their opening two games, before a distant 2-0 derby defeat to Al Ittihad and riotous 4-3 victory versus promoted Al Ain. Asserting consistency within the ranks of a third-placed roster will now be essential for boss Vladan Milojevic, who’ll hope Syria superstar Omar Al Somah throws off the shackles after a hat-trick in the latter-mentioned outing ended his three-match SPL goal drought. Al Ahli Jeddah striker Omar Al Somah (l) challenged by Al Ittihad’s Ahmed Hegazy (EPA). Second-placed Shabab, meanwhile, have been utterly transformed by the addition of Argentina metronome Ever Banega. A warrior spirit and unnerving calm from the penalty spot have combined to hand the Riyadh outfit four more points after four games (10) than a year ago (six), while their goal count (eight) is more than double the requisite figure (three). Their average percentage for ball possession has also gone up to 55.6, from last season’s 47.6. It’s now four years since Ahli added the last of four SPL crowns and eight since Shabab won their eighth. Belief will abound about another if either claims all three points at King Abdullah Sports City. Prediction: Al Ahli Jeddah 1-2 Al Shabab AL TAAWOUN V AL WEHDA (TUESDAY, 18:50) 2020/21 is yet to, truly, get started for both these aspirant sides. 2018/19 King’s Cup winners Taawoun have struggled to snap out of the funk which enveloped them at the end of 2019/20 and are down in a disappointing 11th. Even reintegration of Cameroon striker Leandre Tawamba after a rancorous summer has done little, with three goals the joint lowest. This situation is worsened by a gaping creative deficit. The club’s five key passes is the SPL’s least, while aerial targets Tawamba and Australia forward Mitchell Duke are in a team which has put in only the ninth-most crosses (60). Mitchell Duke (r) in action for Al Taawoun versus Al Ittihad (EPA). Wehda, who finished fourth last term and historically made the 2021 AFC Champions League, are in even-worse condition in 14th. Their call to poach Ivo Vieira from Portugal’s Vitoria de Guimaraes has yet to prove fruitful, three defeats and a solitary win in the dying seconds versus promoted Al Qadsiyah being registered. Only three clubs have conceded more goals than them. New centre-back Pedro Henrique has looked especially uncertain. Something will have to give at King Abdullah Sports City Stadium with a draw of little use. But whether either can force victory is another matter, entirely… Prediction: Al Taawoun 1-1 Al Wehda MATCH-WEEK FIVE FIXTURES Monday 16:15 Al Raed v Abha 16:30 Damac v Al Ain 18:25 Al Qadsiyah v Al Batin 18:45 Al Faisaly v Al Ittihad 19:15 Al Ahli Jeddah v Al Shabab 21:15 Al Hilal v Al Nassr Tuesday 18:50 Al Taawoun v Al Wehda 20:30 Ettifaq v Al Fateh
Read More

Shoya Nakajima era at Al Ain should get under way for this...

Cycling goes full blast next year, with or without vaccine

Riches vs reach and royalty: NCAA choices put league in...

One promises riches. The other? Treatment reserved for royalty. One thing’s for...

The wife of Governor of Anambra State and founder of Caring Family Enhancement Initiative...

[Daily Trust] Governors of the 36 States of the federation on Wednesday "unanimously"...

The Philippine Basketball Association (PBA) thawed the ice on player movement on...

Hamilton fired up to resist ‘new generation’ again in 2021

Lewis Hamilton and his Mercedes team will face ferocious renewed determination from...

Kai Sotto’s stint with Gilas Pilipinas in the Fiba Asia qualifiers will hinge on...

The Kano State Government on Saturday confirmed the first case of Novel Coronavirus...