A poignant Arabian Gulf League clash awaits at Zabeel Stadium when Al Wasl and Fujairah meet less than 24 hours since the death of their iconic former coach, Diego Maradona, was announced. The football world was left bereft on Wednesday when... 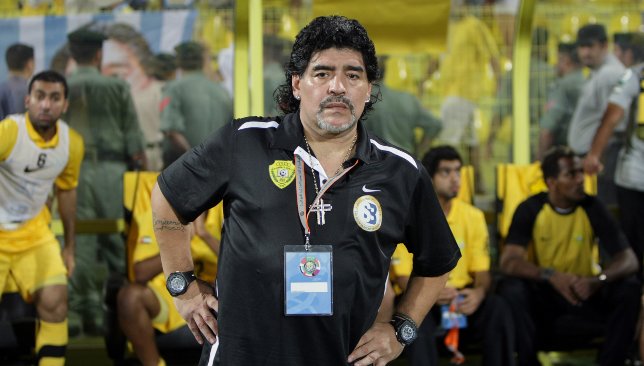 A poignant Arabian Gulf League clash awaits at Zabeel Stadium when Al Wasl and Fujairah meet less than 24 hours since the death of their iconic former coach, Diego Maradona, was announced. The football world was left bereft on Wednesday when the Argentina maestro suffered a heart attack at his home in Buenos Aires, having recently been treated to remove a blood clot on his brain. These two struggling sides will feel this loss more than most, with “El Pibe de Oro” (“The Golden Kid”) leading Thursday’s hosts in a rollercoaster 2011/12 and the Wolves ending his five-year absence from the dugout when they hired him to oversee a tumultuous promotion campaign out of First Division League for 2017/18. “Goodbye, legend” was the simple message tweeted by Wasl about the World Cup 1986 winning hero and venerated two-time Serie A champion at Napoli, with Fujairah adding about the 60-year-old: “Rest in Peace”. Meanwhile, ambitious Al Wahda will strive to end a long winless run at Al Ain when match-week seven culminates with an intense Abu Dhabi derby. The buoyant Clarets moved into second spot last weekend thanks to a commanding 3-0 rout of 10-man Ajman. But they travel to a Hazza bin Zayed Stadium on Friday where they last tasted top-flight victory nearly seven years ago, plus is now home to resurgent hosts after ending an unconvincing start to the season. Shabab Al Ahli Dubai Club, meanwhile, face growing pressure to prevail against lowly Ajman after 2019/20 pacesetters descended into 2020/21 also-rans. Their preceding 5-3 defeat to Al Jazira left them down in eighth, increasing the spotlight on Gerard Zaragoza. Al Bayan has linked former UAE and Al Nasr supremo Ivan Jovanovic with the post. Their current coach, however, was convinced about an immediate fightback. “We are going into an important match to compensate for the stumbling block of the last round and are ready to face Ajman,” Zaragoza stated. “I am the most sad and sorry for the first loss in my career with Shabab Al Ahli. The players have the necessary experience to overcome this difficult stage.” The Pride of Abu Dhabi will also supply the opposition when bottom-placed Hatta welcome debutant boss Vladimir Vermezovic into the dugout. “I sensed the desire of the players during training to improve the conditions of the team,” the ex-Partizan Belgrade tactician said. “The players face a mental handicap because of the current situation, but they have the necessary strength to amend it. “I watched four matches of the team before my arrival and I look forward to presenting a summary of my experience.” لقد حان موعد الكلاسيكو
Read More

Aaron has proven self, but isn’t stopping there

Japan presses on with Olympics preps despite surging coronavirus...

With blazing backcourt, Hotshots cut Painters down to size,...

Coach Chito Victolero has always believed that Magnolia has the best backcourt players...

Richard Pusey who allegedly fled the scene after the death of four policemen when...

Son Heung-min and Harry Kane have been the Premier League’s dynamic duo so...

Kenya: I Was Extremely Upset Not to Start Champions League...

[Nairobi News] Victor Wanyama has continued his rant about his former club Tottenham...

In a conference played inside a bubble, where fans were barred from the stadium,...