The ADIB Staff Cricket Cup returned with a bang on Friday as the final two spots for the quarter-final rounds were booked by DTS Lions and Trade Cheetas. DTS Lions topped Pool Five with a full quota of nine points from their three games after... 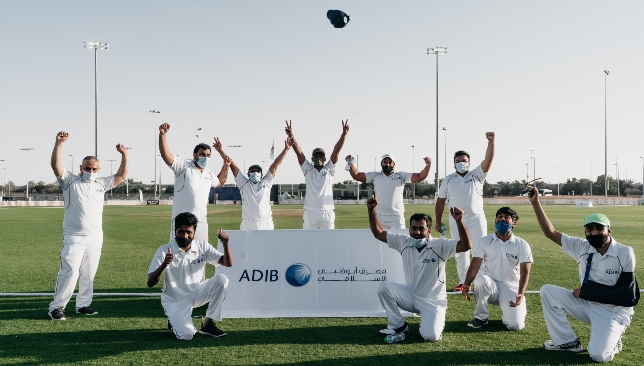 The ADIB Staff Cricket Cup returned with a bang on Friday as the final two spots for the quarter-final rounds were booked by DTS Lions and Trade Cheetas. DTS Lions topped Pool Five with a full quota of nine points from their three games after a thrilling last-ball win over Prime 11. It was a direct shootout for top spot in the group, with both teams coming into the game on the back of undefeated campaigns. In the end, it was the DTS Lions who held their nerves to clinch a two-run win. Prime 11 were set a daunting target of 94 to win in 10 overs, but finished agonisingly short of the finish line as they were restricted to 91-6. While the defeat to DTS Lions sealed their fate in the tournament, Prime 11 did end their campaign with a consolation win courtesy of a forfeit by FCD Challengers. The Challengers’ decision to opt out of the tournament also meant that IT Falcons were awarded their first points of the tournament. Meanwhile in Pool Seven’s fixtures at the adjacent Oval Two in Zayed Cricket Stadium, Trade Cheetas topped the charts with three victories in as many outings. The Cheetas proved to be too good for Digital Qalandars in a lopsided encounter which saw them romp home to a six-wicket win. Having restricted the Qalandars to just 52-5 in their 10 overs, the Cheetas sailed to a comprehensive victory inside just six overs and the loss of a solitary wicket. Earlier in the day, the Qalandars had suffered a similar fate after falling to a 22-run defeat to United 11. Chasing a target of 75 to win, they were able to muster only 52-6 in their 10 overs. United 11 picked up a second win later in the day after ERM – Team opted to forfeit their fixture. Despite those two victories, United 11 were only able to finish in second spot in the ground after their loss to Trade Cheetas in an earlier round. The ADIB Staff Cricket Cup will hold its grand finale on February 12 in Abu Dhabi, with an action-packed day that will get underway with the four quarter-final clashes. DTS XI will take on DSU Daredevils in the first quarter-final while DTS Lions are pitted against Group Risks. Card United Eleven lock horns with Trail Blazers while ADIMAC Tigers will battle Trade Cheetas in the other quarter-final fixtures.
Read More

ONE: Robin Catalan taps out to Japanese foe

Dancesport aces give back in pandemic

The women who helped harvest 10 of 13 gold medals for the Philippines in the last...

British heavyweight Dereck Chisora has said he is prepared to face Dillian Whyte...

Jaja Santiago, after taking Japan by storm, is ready to spark her home professional...

MELBOURNE—Top seed Novak Djokovic survived a major injury scare as he battled past...

Hotshots to pick best fit for them at No. 6

Magnolia will do everything to get the best possible talent it can at No. 6 in the...

[New Zimbabwe] THE Zimbabwe Association of Doctors for Human Rights (ZADHR) has...

A new year meant a new season in the Ball Above All Sports calendar. The league...